Flora and Fauna of the Beaches 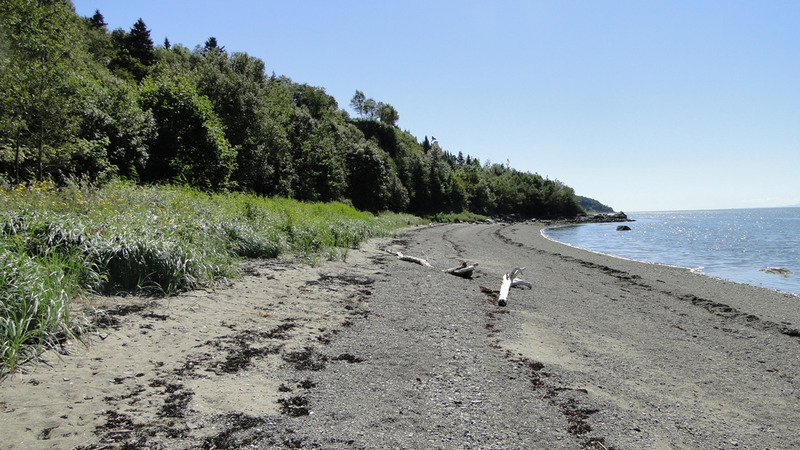 The sandy, silty and rocky beaches of Cacouna are invaded, twice a day, by a seawater tide (Estuary) that is rich in nutrients. Although, season after season, they are subjected to the onslaught of waves and ice that can often be violent, these beaches represent a complex environment, rich in plant and animal life. Living organisms constantly search for shelter and food there.

For the watchful observer, a walk along the beach becomes an uninterrupted journey of discovery. It’s to some of these living treasures that we invite your attention. 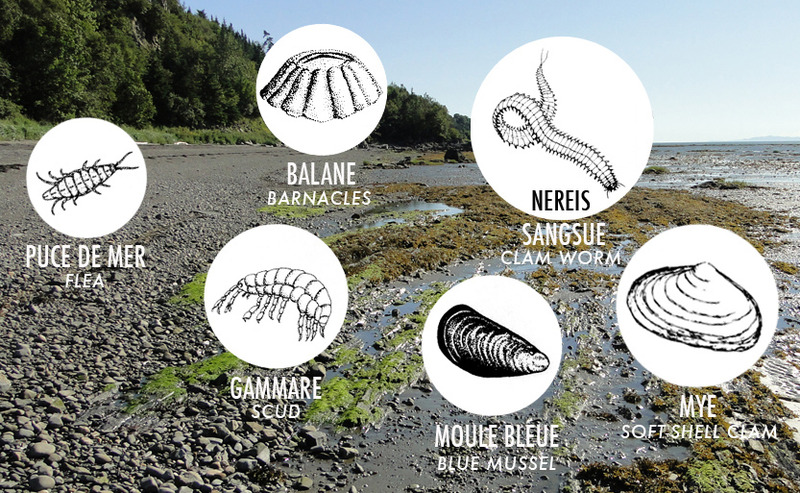 A beach without life? Don’t be fooled. Sheltering from the sun, under stones, in the sand and silt, in the salt pannes among the brown algae or in rocky water basins where seawater forms little pools, living organisms are hidden, motionless, like clam worms (leeches), scuds, and sand fleas. Others clamp onto rocks or close their shells while waiting for the next tide, like barnacles, softshell clams and blue mussels. 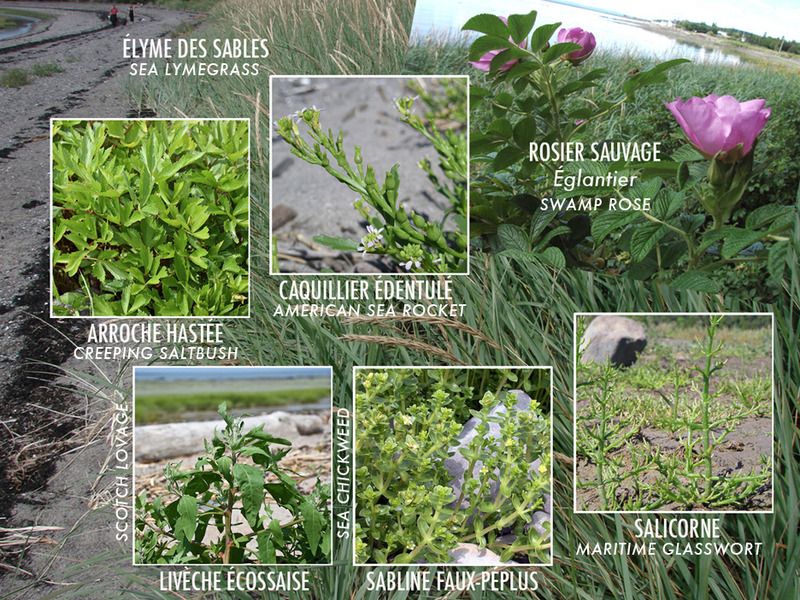 At the top of the beaches, a plethora of marine plants take root, nourished by the continuous supply of nutrients transported by the high tides. For humans, these plants are a true gift of nature: some, like the swamp rose and sea lymegrass, act as natural protection against the high tides and coastal erosion.

Amongst the others is an astonishing variety of edible plants, rich in vitamins and mineral salts with many medicinal properties, hence the importance of intelligent use, picking them sparingly to prevent their disappearance. One can learn to recognize and appreciate Scotch lovage, creeping saltbush, American sea rocket, sea chickweed, and maritime glasswort to illustrate just a few. 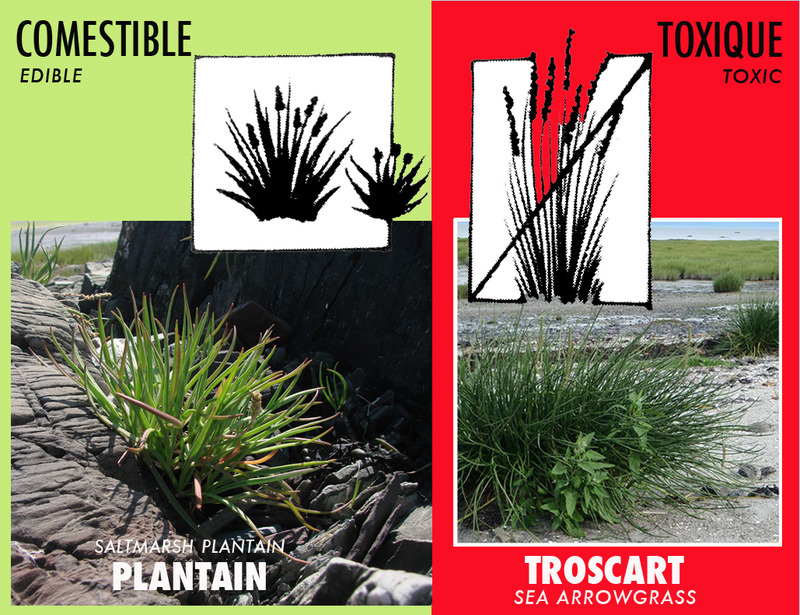 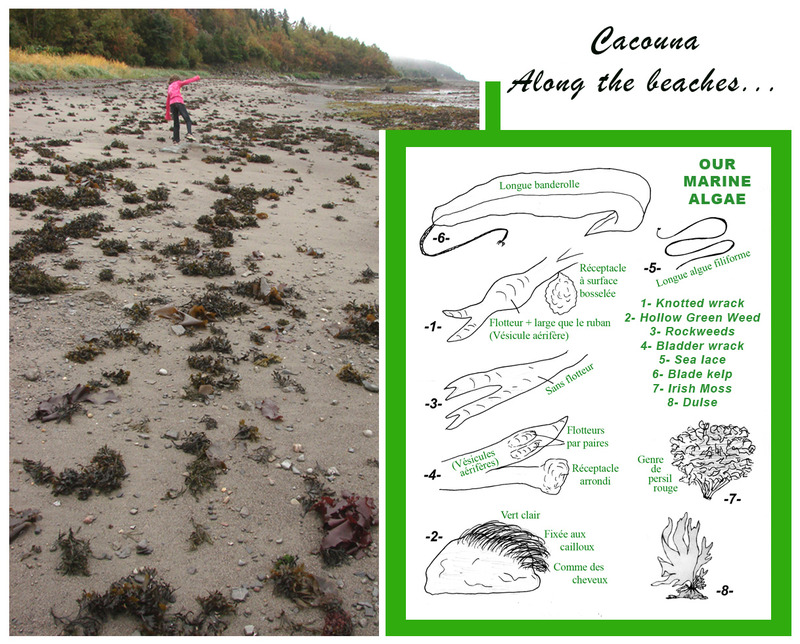 “Algae is a plant with chlorophyll that lives for the most part between the tidal zone and the fluvial limit of light penetration. It generally attaches itself to rocky bottoms, to shells, or to other algae, and is nourished directly from the nutrients in the seawater.

It is impossible to walk along the beaches of Cacouna without coming across some of the algae illustrated here.

BROWN ALGAE:
- Blade kelp: large kelp that can reach lengths of 12 metres! Can be found starting at the low tide line, but after strong winds and high waves, can sometimes be found all over the beach amongst other species that have also been ripped up and deposited by the latest tide. It is also known as ‘kombu’.
- Sea lace: long, skinny algae that can reach lengths of 5 metres. Can also be found on our beaches, deposited after a particularly strong tide.
- Knotted wrack, Rockweeds and Bladder wrack are 3 species occurring in abundance clinging to the bedrock along the beaches in the entire intertidal zone. They can easily be identified by the presence or absence of floaters (air bladders) along the surface (blade) of the plant and by the number of these. Commonly called ‘rockweed’, this algae, which accumulated on the beaches at the high tide mark, was, for a long time, collected by local farmers to be used as fertilizer in gardens and fields.

GREEN ALGAE:
Hollow green weed: the most common species of green algae. Light green in colour, it looks like hair stuck to the stones in the mud flat area of the beaches.

RED ALGAE:
Irish moss: densely tufted plant; dark red in colour, sometimes green or yellowish; whiteish when the algae is dead. Resembles parsley.
Dulse: this edible red algae is used in soups or eaten as chips when dried and flaked. 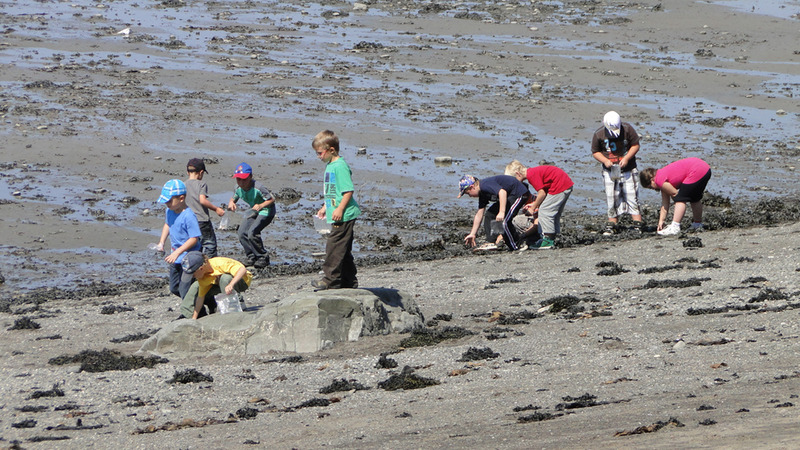 Each tide, as it goes out, deposits debris on the beach revealing what it is carrying, what lives in it. Algae, shellfish, sea urchins, shells, plant debris (driftwood, rushes), but also various kinds of waste discarded by vessels or upstream riverside communities.

And what of those tiny treasures that many walkers of all ages delight in collecting: pieces of coloured glass or porcelain (tableware), with well-polished edges from the repeated friction they have undergone; or small stones whose shapes, textures, ingrained patterns or fragments emerging from them surpass imagination? Or even, and yes ... it has happened on occasion, the discovery of a bottle carrying a message from across the seas.

Birds of the Beaches 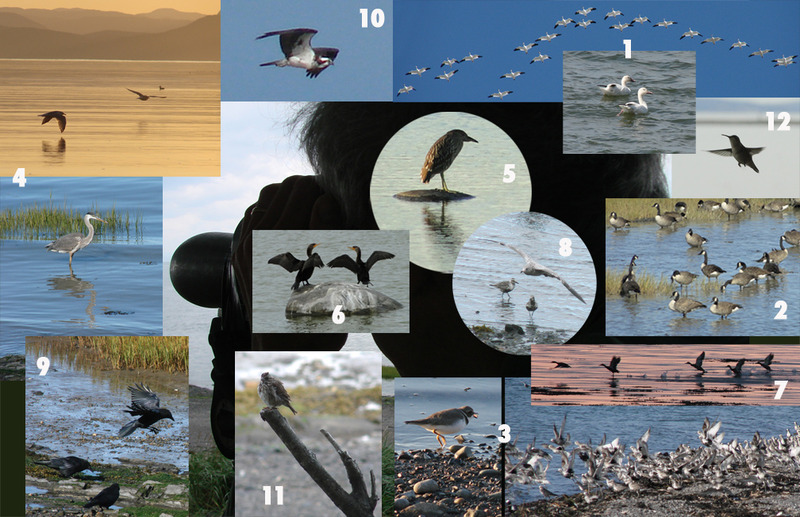 The numerous shelters and habitats provided by the vegetation, salt pannes and rocks along the shores for small marine creatures that develop there or can be found there attract many species of birds. They come to feed, rest, conduct their courtship and even nest. During migration, there are, of course, snow geese (1), Canada geese (2), and plovers and sandpipers (3). However, from spring to fall, great blue herons (4), black-crowned night-herons (5), double-crested cormorants (6), ducks (7), gulls (8), crows (9), osprey (10), sparrows (11), and even humming-birds (12) and bats are part of the daily landscape of Cacouna’s shores.

And if you continue your beach jaunt eastwards towards Gros-Cacouna and its ornithological site (section of the Kiskotuk Coastal Park), you will be at the heart of multiple habitats where the most unexpected observations await you every year.

Historical moment I – All kind of fishes 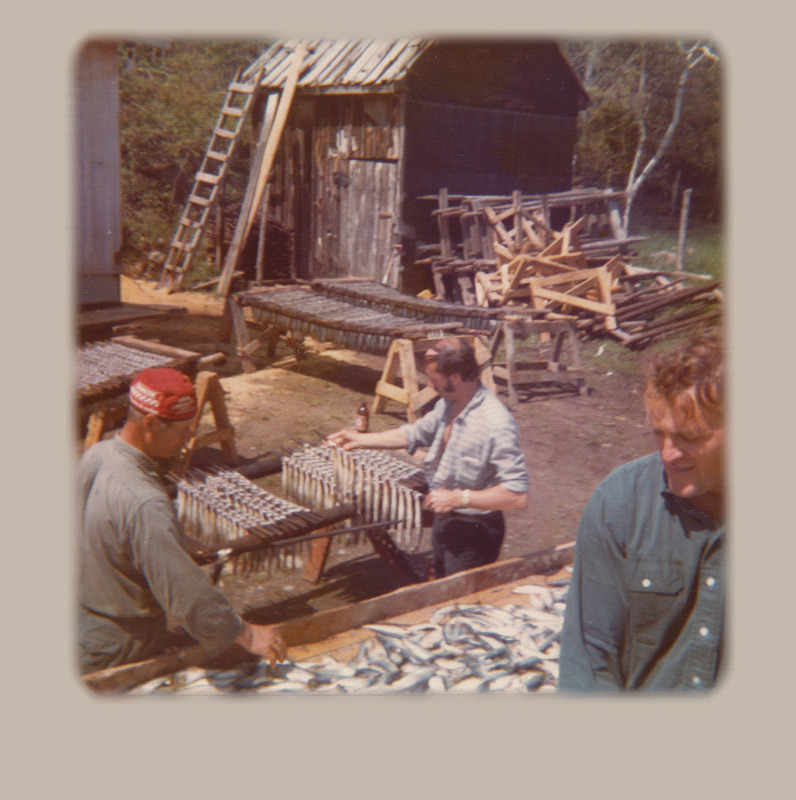 In the 1970s, two fishermen from Rivière-des-Vases, Joseph-Marie Lebel (Manie) and his son Ghislain (foreground), prepare herring for the smokehouse.

In the 19th century, the settlers made good use of this environment abounding with all kinds of fish — herring, salmon, shad, smelt, capelin, sardine, halibut, windowpane, tommy-cod, eel and sturgeon.

The fishermen visited their weirs at low tide, whether during the day or at night. Using a seine, a scoop net or a shovel, the men collected their catches and loaded them onto barges, then transferred them onto wagons or tipcarts. Once back at the house, the whole family got to work sorting the catch, stacking it in barrels of brine. The herring was then threaded onto wooden rods by the dozen and hung in the smokehouse, known locally as a boucanerie. 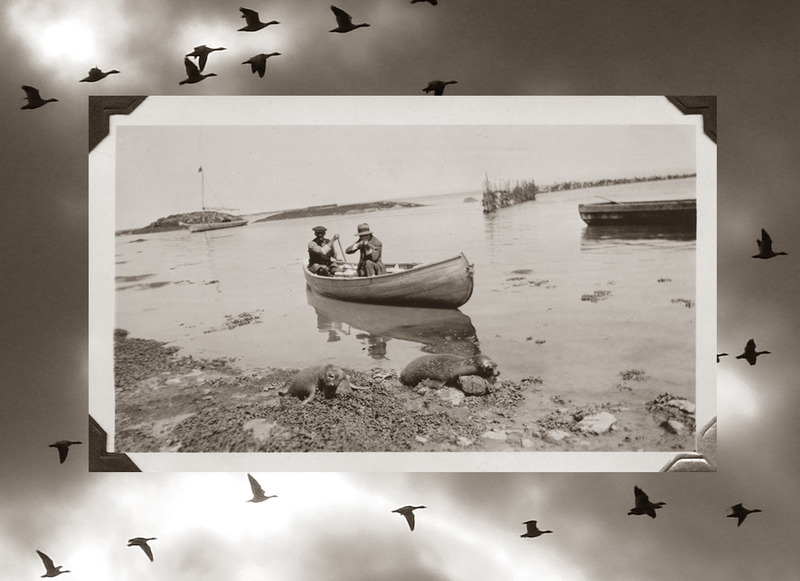 Hunting for “porpoises” (belugas) on the coast near Île Verte in 1920.

(( During the annual migration, the fishermen-farmers hunted wild geese in the pools on the tidal flats. When summer arrived, the islanders let their livestock graze the salt hay meadows along the shore. In 1833, the people of Rivière-des-Vases combined their riverfront lands as shared pasture for all their livestock. )) 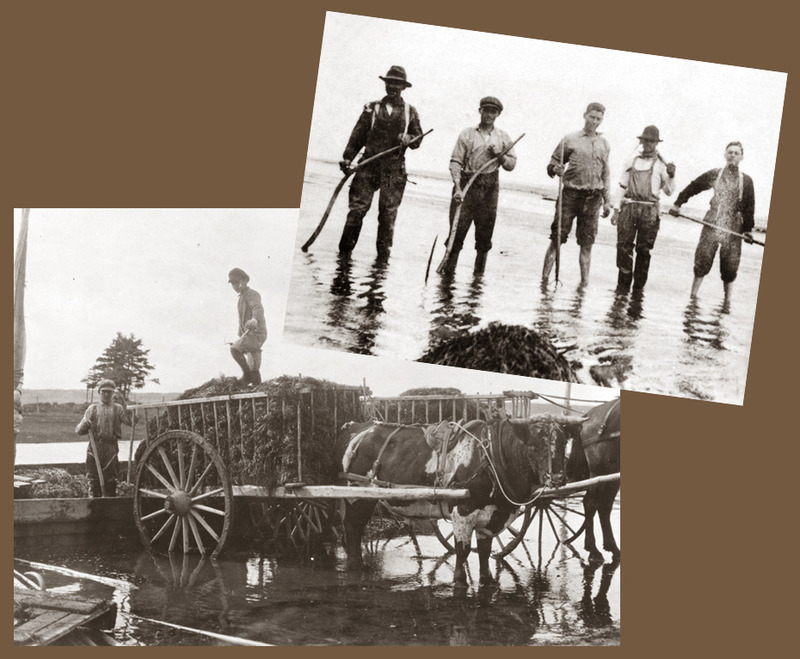 Eelgrass harvesters, Adrien Guillemette, Ernest Labrie, Freddy and Grégoire Guillemette and an unknown man on the tidal flats near Île Verte and Albert Caron on an eelgrass harvesting trip, circa 1930.

Between 1890 and 1935, the eelgrass harvest fostered the area’s rapid economic development. Both the islanders and the people of Rivière-des-Vases profited from the growing market for this resilient material, which was used as stuffing for mattresses, the seats of the first automobiles and many other items. As the water level slowly descended during ebb tide, teams of men outfitted with high boots harvested the tall grass on the tidal flats, loading it onto wooden barges. Then, using wagons, they spread it in the fields near the shore to dry.