A History Linked to the River 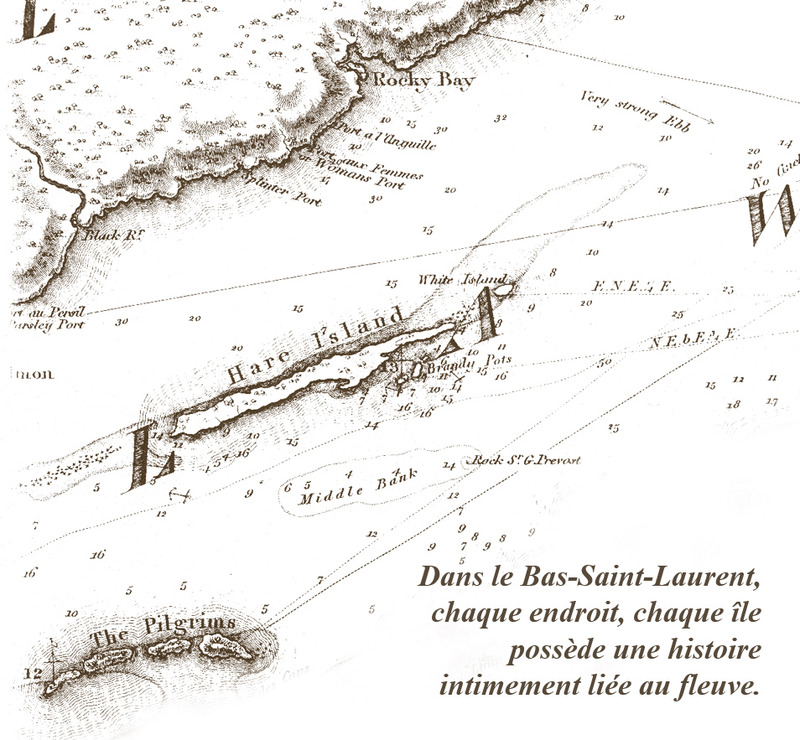 In the Bas-Saint-Laurent, the history of each place, each island is intimately linked to the river. On the horizon, facing Rivière-du-Loup, is île aux Lièvres (Hare Island), neighbour to the archipelago Pot à l’Eau-de-Vie (Brandy Pot archipelago) and île Blanche (White Island). In the past, these islands were associated to the seigneuries of the south shore. In the 19th century, the Seigneur of la rivière du Loup, Alexandre Fraser, granted several concessions on them.

This magnification of the map by surveyor Joseph Bouchette (1815) shows the St. Lawrence and its islands. In the middle of the river, l’île aux Lièvres (Hare Island) separates the south channel, used by ships, from the north channel running along the north shore of Charlevoix. The anchor symbols each side of the îles du Pot à l’Eau-de-Vie (Brandy Pots) and another near the western tip of l’île aux Lièvres (Hare Island) indicate anchorage points. The cross on the Brandy Pots marks telegraph station #13; the next station was located on one of the îles Pèlerins (The Pilgrims) 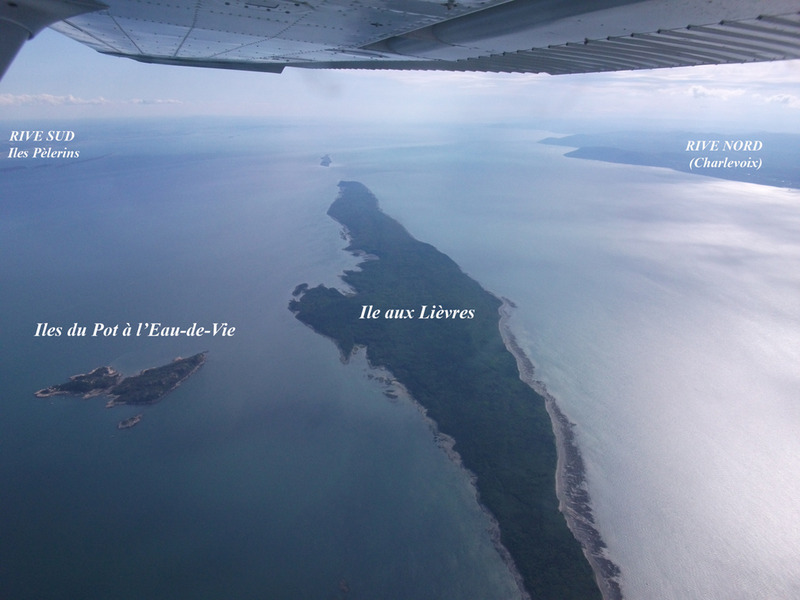 The name of Hare Island originates from the small mammal that lived there in large numbers in its coniferous forest. During his voyage in 1536, Jacques Cartier stopped there and his sailors killed a great many hares for food. The explorer gave the place its name.
(Source : Commission de Toponymie du Québec)

13 km in length, Hare Island, densely forested, offered a greater potential for colonization than the other islands composed primarily of rocks.

On Hare Island, the shallow soil and numerous rocky outcrops limited agriculture; however, the tidal flats enabled fisheries to be installed for small fish and blubber fish (belugas). In order to live there, the islanders needed to have a schooner or rowing boat. In 1823, Captain Joseph April de Kamouraska and his two sons were granted land concessions and lived on the eastern tip of the island. About fifteen years later, the family of the navigator Jean-Baptiste des Trois Maisons known as Picard lived in the same place. At the end of the 19th century, two brothers, Lucien and Eugène Bouchard, were the last to live there from cultivation, fishing, hunting, and logging. Over the different periods, the island’s forest was exploited for firewood, timber and pulp. 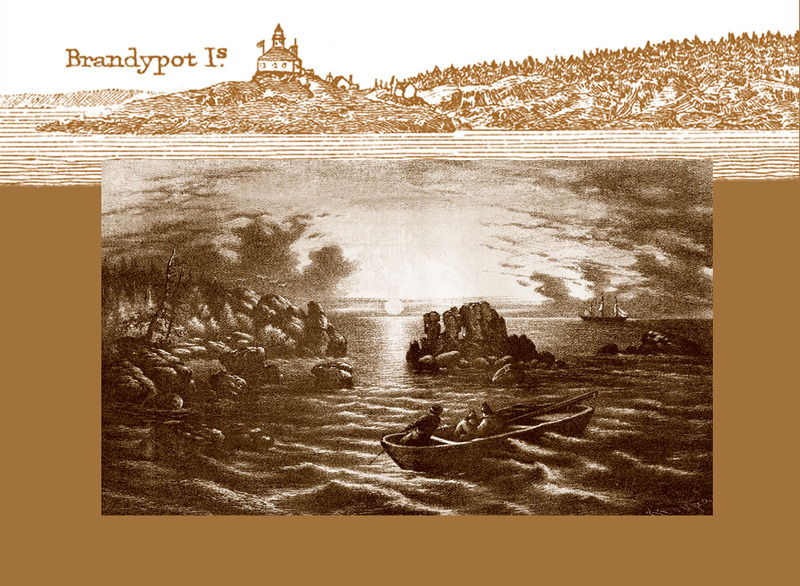 Extract from a nautical chart from 1949 showing the Brandy Pot archipelago with its lighthouse.
The "Brandy Pot" rocks, from a sketch by Bohuslav Kroupa.

The name Pot à l’Eau de Vie (Brandy Pot) goes back to the 18th century. Already known as a safe anchorage point by navigators to shelter from inclement weather, the archipelago was used by many different crews. The current name was no doubt inspired by the jugs or pots used by men for drinking fresh water (‘eau-de-vie’ is literally ‘water of life’ as well as another name for brandy). Already in 1735, this name can be found on a map by the hydrographer Testu de La Richardière.
(Source : Commission de Toponymie du Québec)

The south channel of the St. Lawrence with its islands and substantial reefs has always been difficult to navigate. During northeast gales and periods of fog, sailing ships and then steamers could shelter near the Brandy Pots. At the beginning of the 19th century, during the years of conflict, warships formed convoys of merchant ships which sailed from the archipelago. On one of the islands, a telegraph station informed Québec of their arrival and departure. Acknowledged for many years, this anchorage point offered a good riverbed to secure vessels. Whilst waiting for more favourable weather, the captains and their crews would make their way to l’île du Gros Pot (the Big Pot Island) to the navigator François-Xavier Bernier’s house. From 1843, he welcomed them and offered replenishment as necessary with his associate and brother-in-law, the navigator Jean-Baptiste des Trois Maisons known as Picard. 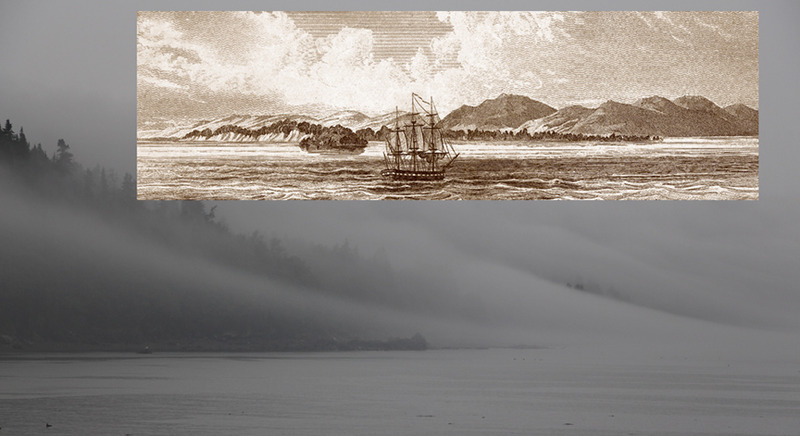 Facing Brandy Pot, the Barrett reefs and Marmen and Demers rocks are particularly treacherous traps in the south channel. In 1815, la Maison Trinité (Trinity House) placed a buoy on these shoals as a signal to pilots. Even today, at nightfall we can see its optical warning reminding us of their presence. In the 19th century, several incidents and shipwrecks took place on these reefs: 55 at Hare Island, 54 at Brandy Pot, and 118 at White Island. Usually these were due to collisions between anchored vessels. On other occasions, boats were damaged due to the fog that hid the reefs, to the gales, or to the ice. The first river station to operate tugboats was located near Hare Island. 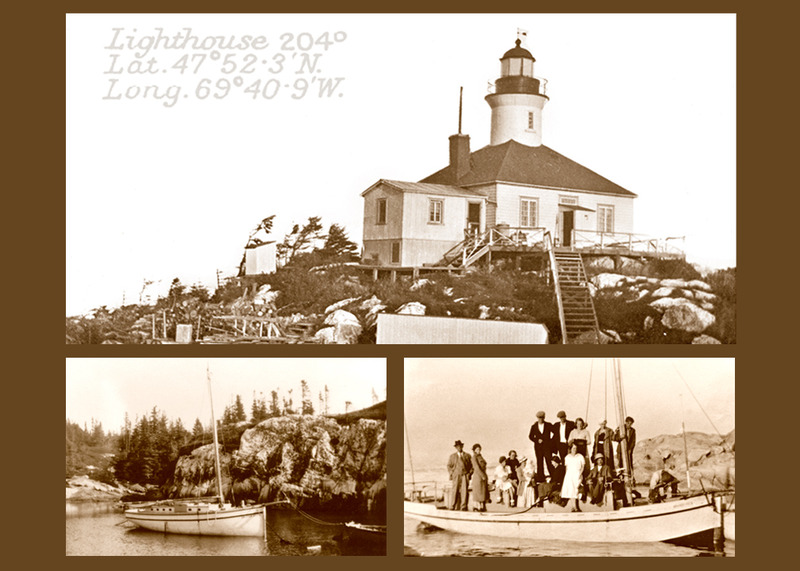 In 1860, the government had a lighthouse built on one of the Brandy Pot islands. The first lighthouse keeper was the navigator Jean-Baptiste des Trois Maisons dit Picard (1862-1873), a local. Over the years, other keepers took care of the proper functioning of the light: Narcisse Richard and his son Alphonse (1874-1914), Arthur Leclerc (1914-1920), then Louis Dubé and his son Roger (1920-1964). The latter was responsible for the lighthouse until it was closed down.

Since 1984, the lighthouse has been restored by the Société Duvetnor. This building, which is classified as a heritage building, now lodges visitors. Today, all the islands in this sector are part of a sanctuary for biodiversity and a natural reserve for sea birds.