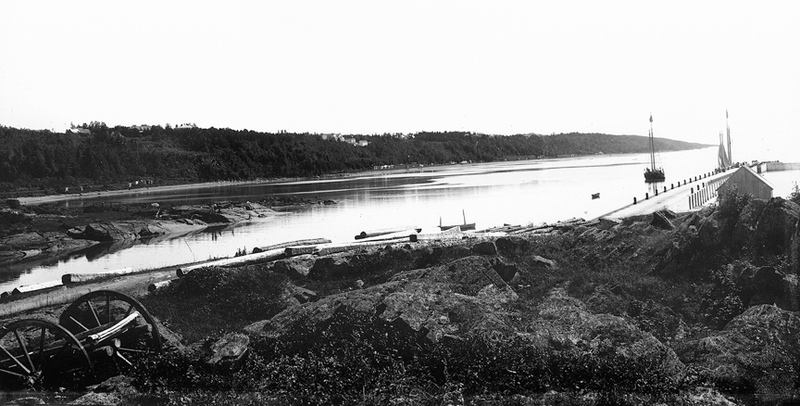 Near the sea. Seaside villas with the beach below, circa 1900.

From near the Fontaine Claire harbor’s wharf, then under construction (1890-1900), Nelligan would have been able to see the three wings of the stately Saint Lawrence Hall, silhouetted on the hill in the distance. 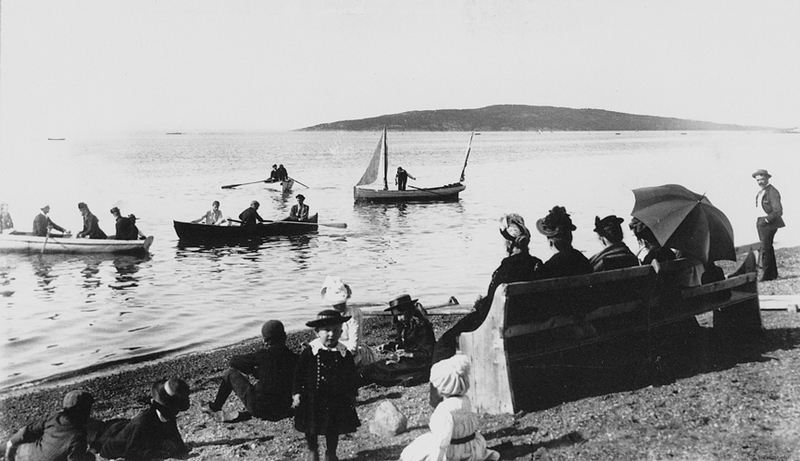 At high tide, the long sweep of the beach was often filled with holidaymakers enjoying a swim or an outing by canoe, rowboat or sailboat. In Nelligan’s time, Cacouna’s reputation as a resort town was at its peak. 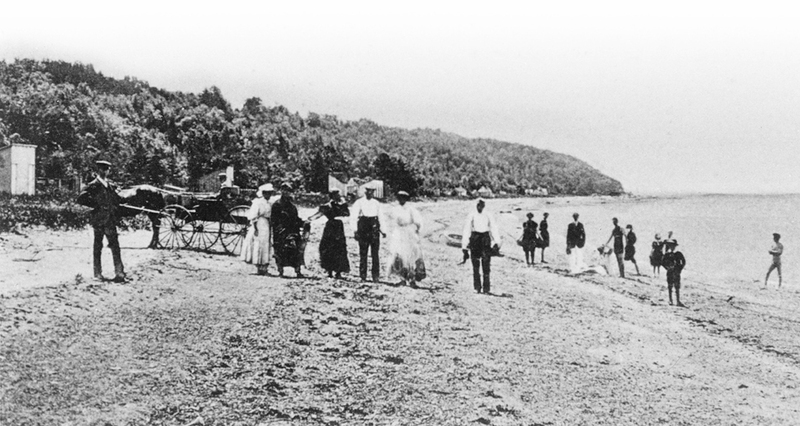 The large beach below the villas.

Three kilometres of sandy beach, very popular at high tide and almost deserted at low tide, separated the wharf from the area around Saint Lawrence Hall. For young Émile, the beach was a daily invitation to adventure. Tidal pools teeming with life, wooded trails brimming with plants and animals, hillsides covered in wildflowers, and delightful scents unfamiliar to a boy from the city... 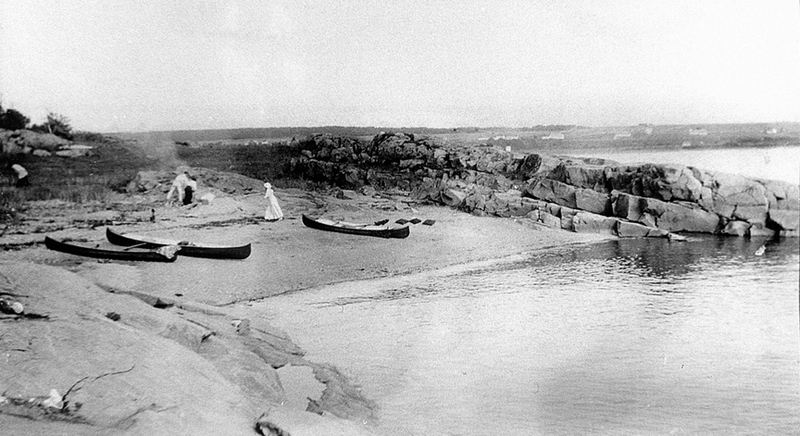 Small beach on the southwestern tip of Gros-Cacouna island, 1900.

In his teens, Émile – who never cared for crowds – sometimes liked to head out by boat with a few friends to Gros-Cacouna, where small isolated beaches awaited far from the bustle and noise of the town. 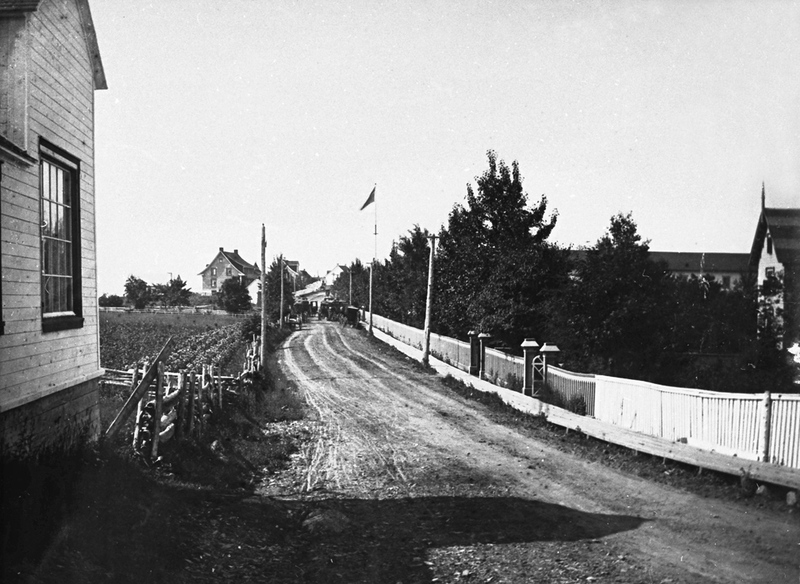 At other times, Nelligan loved to stroll the village boardwalks, occasionally detouring around the farms, houses and villas to observe people going about their daily lives, engaged in various tasks, gardening or perhaps playing croquet or tennis. 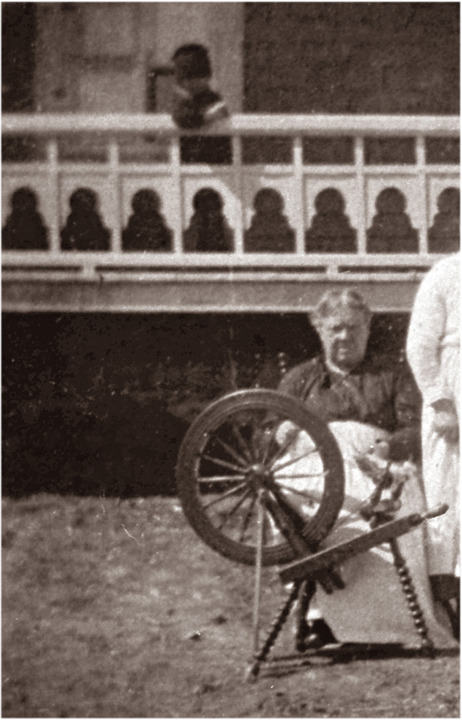 An artisan at her spinning wheel, circa 1900.

Now and then, in front of a farmhouse, he might have seen a woman at her wheel, spinning wool into yarn, while another woman sat rocking on the porch, knitting or crocheting, both of them singing: «Pique aiguille! Assez piqué, piquant!» (La Chanson de l’ouvrière) 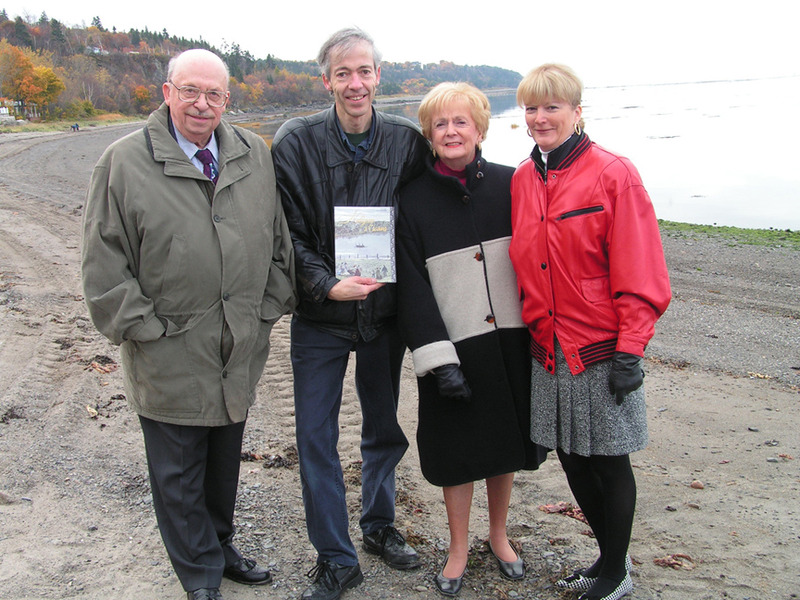 Marielle Corbeil-Saint-Pierre, Nelligan’s niece, second from right, on the beach of the Anse Fontaine Claire in October 2004, for the launch of the book “Nelligan à Cacouna’’.

Cacouna offered Nelligan a world of sounds, colours, scents, sensations unique to its maritime setting. Although a dark destiny awaited the poet – he entered an asylum in August 1899, a year after his last visit to Cacouna, and remained there until his death in 1941 – reports from those who visited him, including his niece Marielle, reveal that memories of his freedom-filled summers in Cacouna stayed with him throughout his life.

“For about a dozen years,” says Marielle Corbeil-Saint-Pierre, Nelligan’s niece, “my father, Émile Corbeil, took us to visit my uncle at the Saint-Jean-de-Dieu sanitorium. (...) In the course of conversation, my uncle Émile sometimes talked about Cacouna: its hotels and gardens, a villa among the trees, and especially the ever-changing St. Lawrence, with its almost musical play of colours. He was pensive when he evoked the past. I noticed that his eyes were fixed on me. I felt he was reliving his youth with a secret fondness, confusing me with his younger sister Gertrude, my mother.” (Nelligan à Cacouna, p.118-119)

Extract of
Following in the Steps of Nelligan