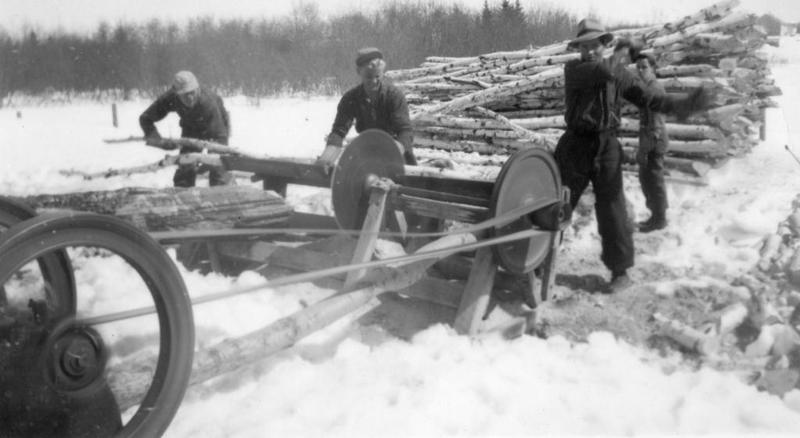 As a result of communications from our ancestors, the community clearly remembers the forest industry operations.

Our ancestors’ testimonials allow us to affirm that in 1927-28, the lock section near Notre-Dame-de-Lorette was developed to supply 4-foot logs to the Lake St. John Power and Paper Dolbeau paper mill by floating the wood on the rivers. In the fall, camps were built out of round-wood for workers who had to spend the winter. They cut as many cords of wood as possible to ensure they received a good wage. In the spring, it was the log drive, and the lock’s sluice valves were opened so that the current carried the wood to the plant.

Trefflé Laforest, a contractor from St-Eugène, took part in the building of the Notre-Dame-de-Lorette forestry sites around 1930, right in the middle of the Depression, since business was well underway in this sector. In one winter, 15,000 cords of wood were cut.

At Rivière-aux-Rats, at the same time, Léonce Martel was the lock-keeper. Noting the level of the water and ensuring that it did not exceed a certain height, Mr. Martel would move the blocks of wood that held back the current.

The conditions on the construction sites were deplorable. There was neither running water nor electricity. The work also involved some danger. The construction of the Rivière-aux-Rats lock led to the drowning of a man named Ouellet. It is said that the worker felt dizzy while he was carrying sandbags and he fell into the river. Stuck in the lock, he could not get out in time.