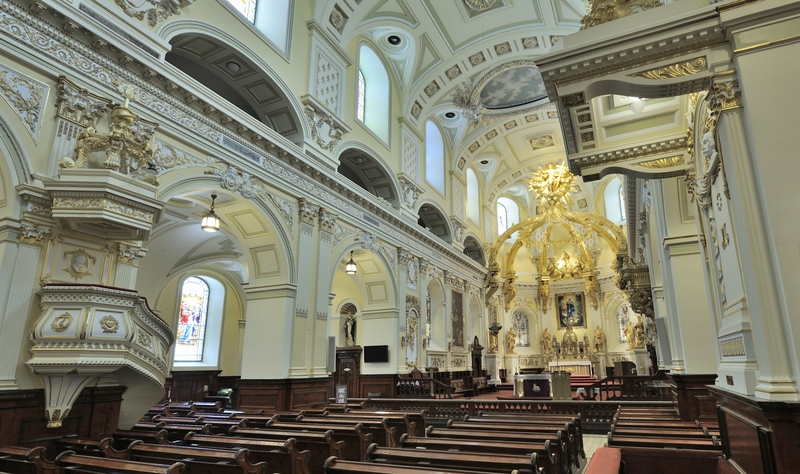 The nave is divided into three parts, a central nave and two lateral naves. Against the aisles, the massive pillars that define the central part of the basilica, align with the location of the walls of the first church (1647).

The rich decoration of this church is intended to teach the faith. Notice the wonderful skies on the ceiling, and the continuity of the decoration from the front to the back. The scenery invites the faithful and the bystanders to live among the angels and the saints.

The pulpit and the sound board 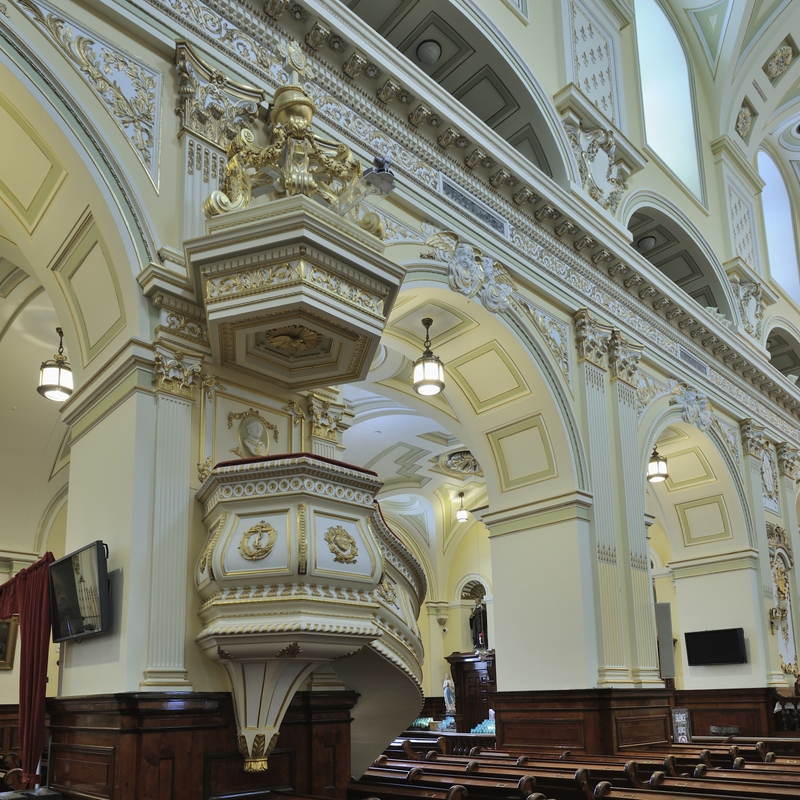 Before microphones were invented, the pulpit, given its central position was a tribune allowing the priest to be heard by a maximum of the faithful. Inspired by Louis, this work stands out because of the artistic form of its drum and the many little details that decorate it.

The sound board, a term that appeared in 1808, is a dome placed right above the pulpit. This ensures a reverberation which projects the preacher’s voice much further.

This pulpit was was created following the fire in 1922. The golden medallion located between the pulpit and the sound board is bearing the likeness of Saint Thomas d’Aquin. The creative sculptors behind the work are Maxime Roisin and Raoul Chênevert. It is a reproduction of the original work created and given by Jean Baillairgé in 1768. 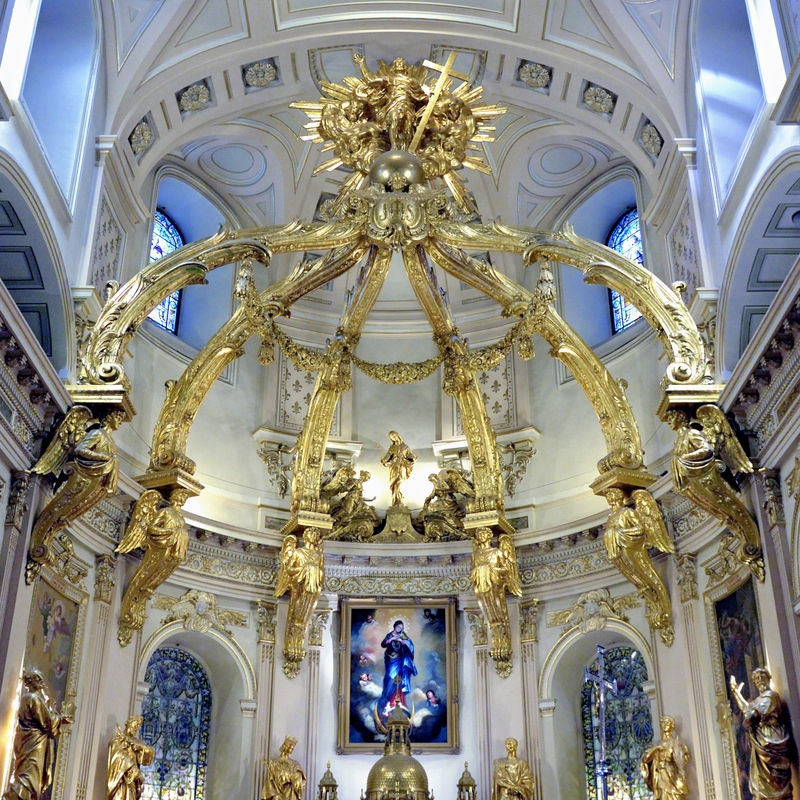 Above the high altar, the canopy can be found.  It is a masterpiece by François Baillairgé, who managed to solve the issue of the "narrowness" of the chorus. By creating a structure which, instead of being supported by massive pillars, is resting on wall-hung caryatid angels. The original version was created between 1787 and 1795.

After the fire in 1922, French sculptor André Vermare redesigned the canopy in accordance with the original work. However, he chose to use plaster on metal lath, which, unlike wood, is a non-combustible material.   Notice its half-wreath shape placed above the high altar to remind us that Christ is our king. 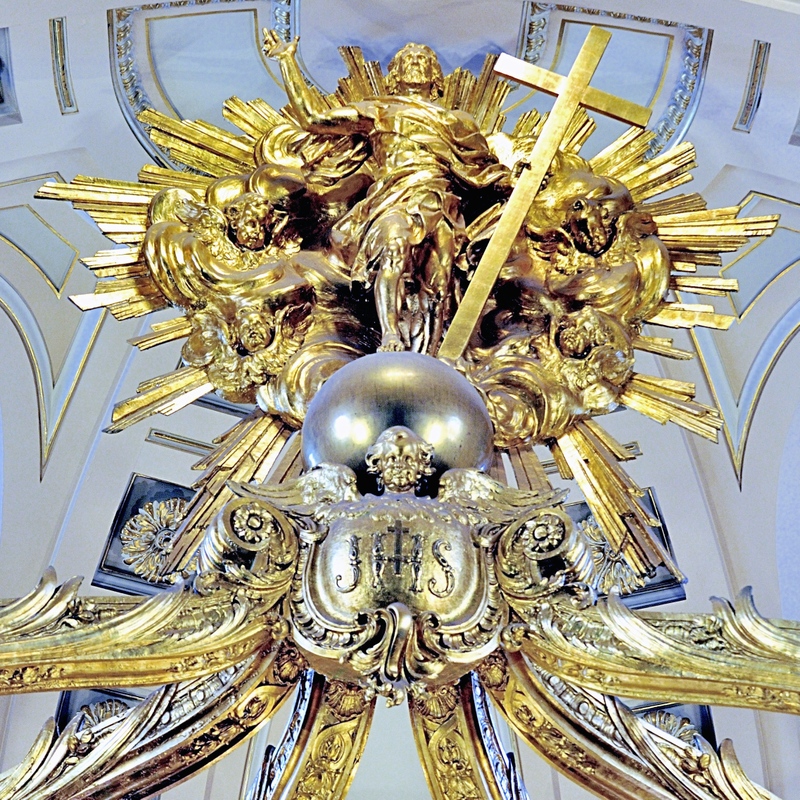 The top of the canopy represents the glorified Christ, from whom a cloud of light streams forth. Surrounded by cherubs, his feet are lying on the ground. Risen and glorified, he is holding the cross of challenge and showing the way to paradise. For centuries, he has been bringing this message of faith to an entire people. 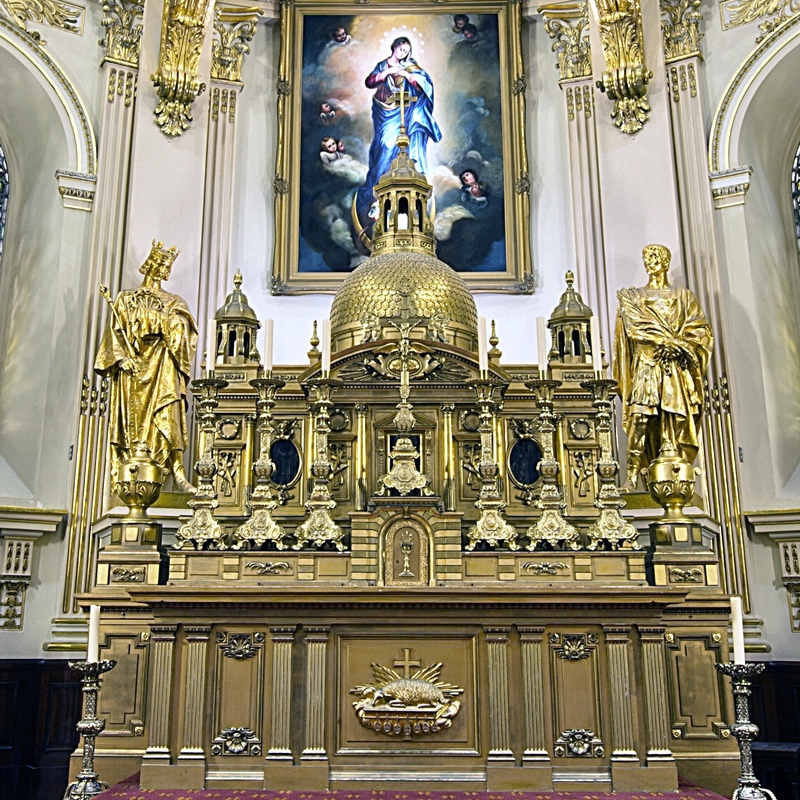 The upper part of the high altar evokes the façade of St. Peter’s Basilica, in Rome. It was made circa 1924 in Quebec by the artists Raoul Chênevert and Maxime Roisin. They sculpted it, polished it and gilded it.  It was then painted and finally assembled. It is mainly composed of wood, but some parts are metal.

Of the same model, the original high altar was destroyed by fire in1922.  It had been designed by François Baillairgé in 1798. 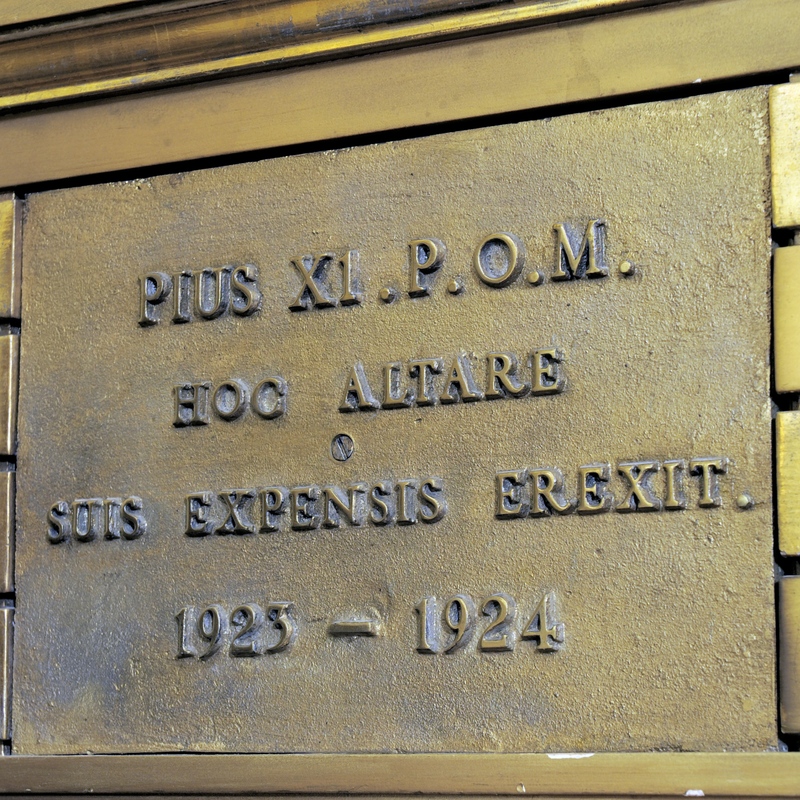 Following the cathedral fire on December 22, 1922, His Holiness Pie XI sent a donation of 50,000 francs to Cardinal Bégin This sum was used to execute the new high altar. A commemorative plaque fixed to the left side of the altar highlights this contribution and bears the inscription: “Pie XI, supreme Pontiff, erected this altar at his own expense”. 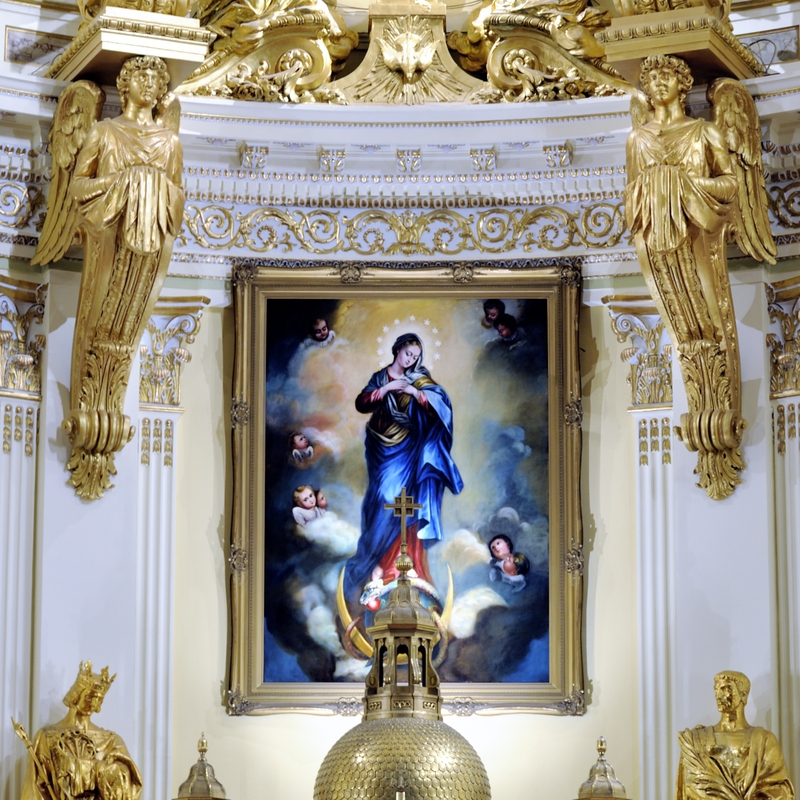 The Immaculate Conception is the principal patron of the Archidiocese of Québec and the Notre-Dame parish.

This work of art was painted in 1924 by Marie-Elmina Lefebvre (1862-1946).
An oil painting, it is known under the name of sister Marie-de-l'Eucharistie, the foundress of the paint shop of the Sisters of Charity of Québec.
A previous version of the painting of the Immaculate Conception was created by French painter Charles Le Brun (1619-1690). But, you guessed it, this painting was destroyed by the fire in 1922.

Statues on the left side of the high altar 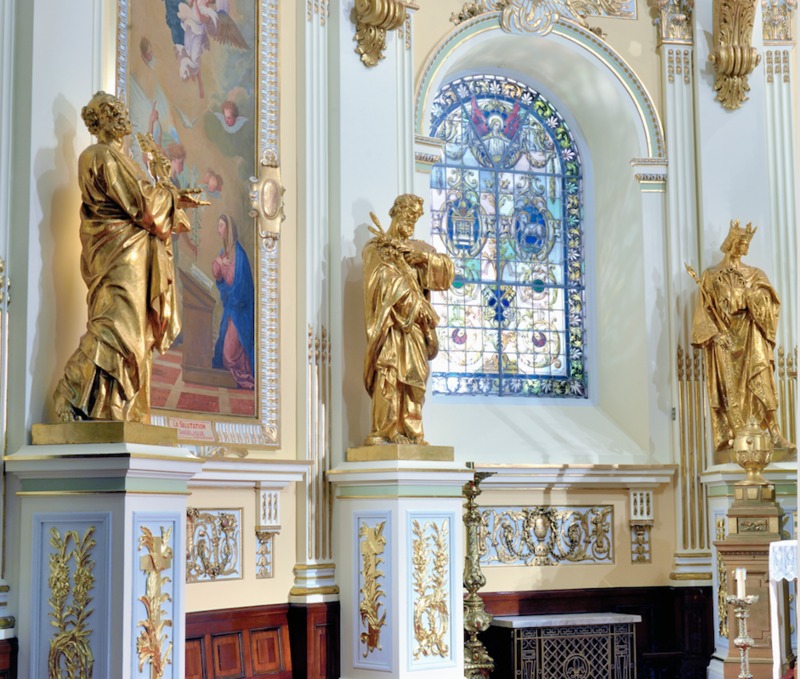 The six statues around the choir are the work of French sculptor André Vermare. They were made in Paris circa 1924. These represent the Apostle Pierre, first pope, Saint Joseph, head of the Holy Family and patron saint of Canada, and Saint Louis, King of France, second patron of the Archidiocese of Québec.

Statues on the right site of the high altar 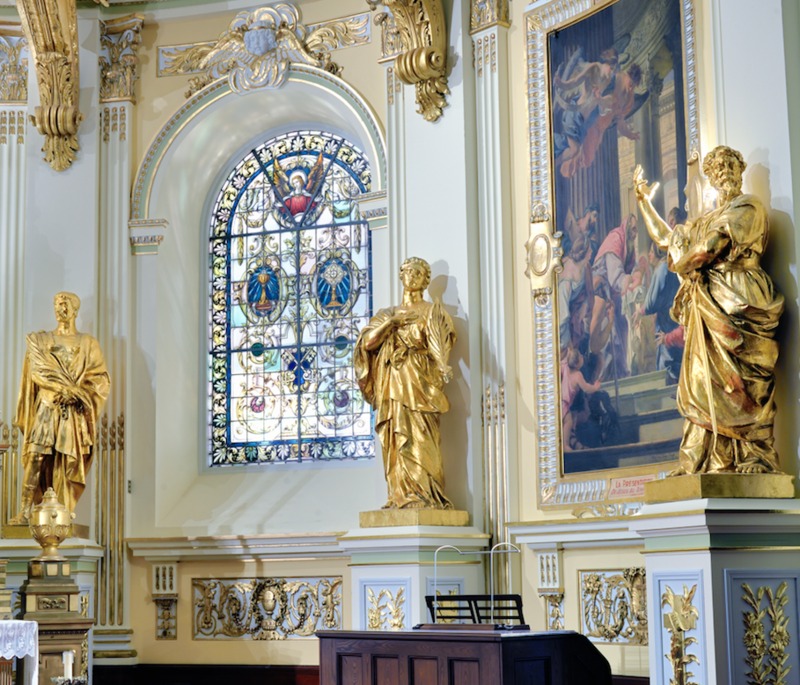 These statues represent Saint Flavien (at left) and Saint Felicity (in the center).  Saint Flavien and Saint Felicity were martyrs of the Church of Rome, from which Saint François de Laval received relics in 1662. The one on the far right represents the Apostle Paul. These statues are made of molded plaster which is covered with gold leaves. Each of them are 180 cm high, 63 cm wide and 58 cm deep. 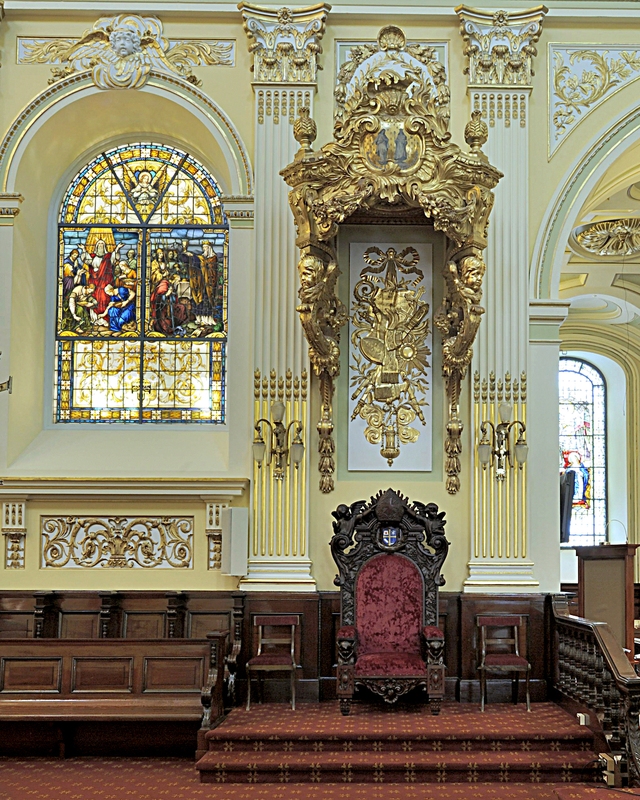 The episcopal throne is the seat of the Bishop. It is also called the “Chair”, from which the church you are visiting takes its name of "cathedral". According to François Baillairgé's original plans, this religious piece of furniture is made of wood and was sculpted in 1925 by Lauréat Vallières, a well-known artist of his time.

The original was also carved in wood and then covered with gold leaves. Its construction lasted over 8 years, from 1787 to 1795.

As for the creation of the canopy above the episcopal throne, Raoul Chênevert continued the work of Georges-Émile Tanguay, deceased in Québec on November 6, 1923. He hired Maxime Roisin, architect from Paris. They mainly used oak, as well as metal. This religious piece of furniture was sculpted and gold-plated. It represents a cherub, wheat, a fleur de lis, a crown, a sceptre as well as the Immaculate Virgin and Saint Louis, patron saints of the Archdiocese of Quebec.

The churchwarden’s pew located at the center of the nave, facing the pulpit, was rebuilt in 1924 based on the original plans of François Baillairgé, dating back to 1799. Back then, it was the master carpenter Pierre Émond who, in 1800, worked with François Baillairgé to complete it.

The canopy above the pew dates back to 1924. It represents Mary’s Assumption, which rises to the heavens, surrounded by angels. It was created by André Vermare.

A medallion bearing the likeness of Samuel de Champlain can be found above the canopy in memory of the founder of Quebec who was a great administrator.

What is the purpose of the churchwarden’s pew? 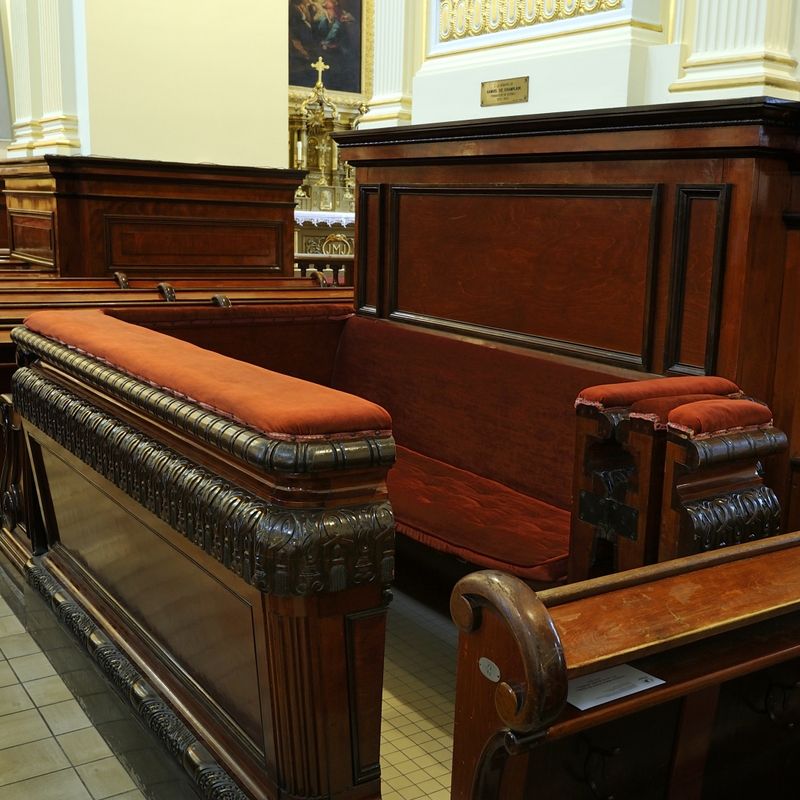 This pew was designed for the church wardens who are lay people in charge of guarding and maintaining the church. These church wardens were authorized to sit in this pew and, as the priest spoke from the pulpit right in front, were provided an enhanced viewing and listening experience. 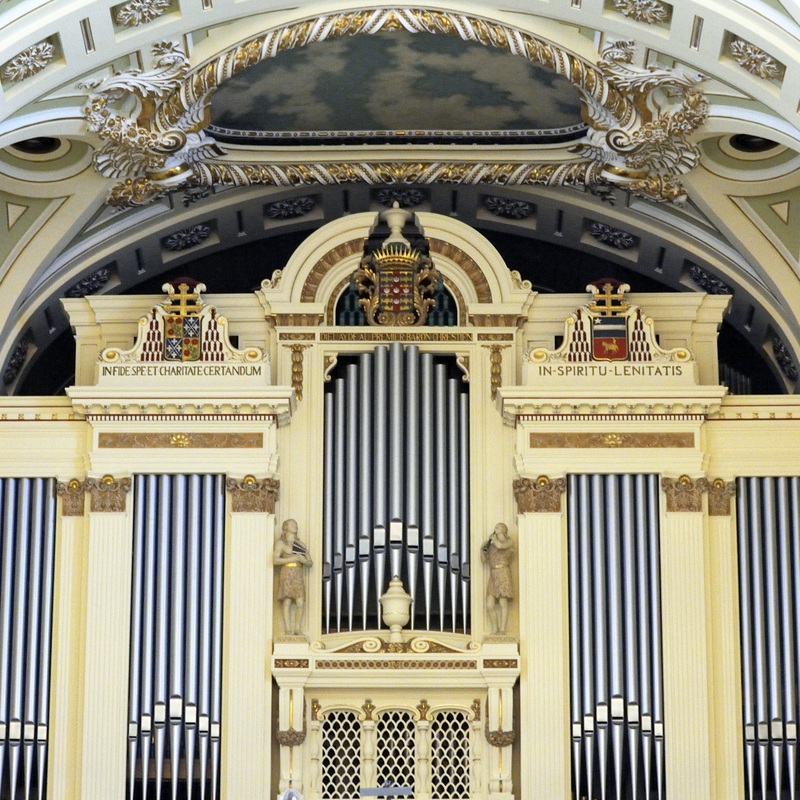 The large organ that can be seen at the back of the basilica was fully restored in 1983 by the Guilbault-Thérien company. With over 5,000 pipes, this instrument was designed by the firm Casavant et Frères in 1927, and is the sixth organ in the basilica’s history. The organist has four manual keyboards and a pedal-board.

The organ case at the center was designed by Montreal architect James Kennedy. Inspired by the Arch of Triumph, the work is adorned by two statues symbolizing the two main faculties of the organist: inspiration and improvisation. It is the creation of Elzéar Soucy, renowned Quebec sculptor (1876-1970). On the organ case we can find the weapons of monseigneur de Laval, as well as those of Cardinal Taschereau and Cardinal Bégin.