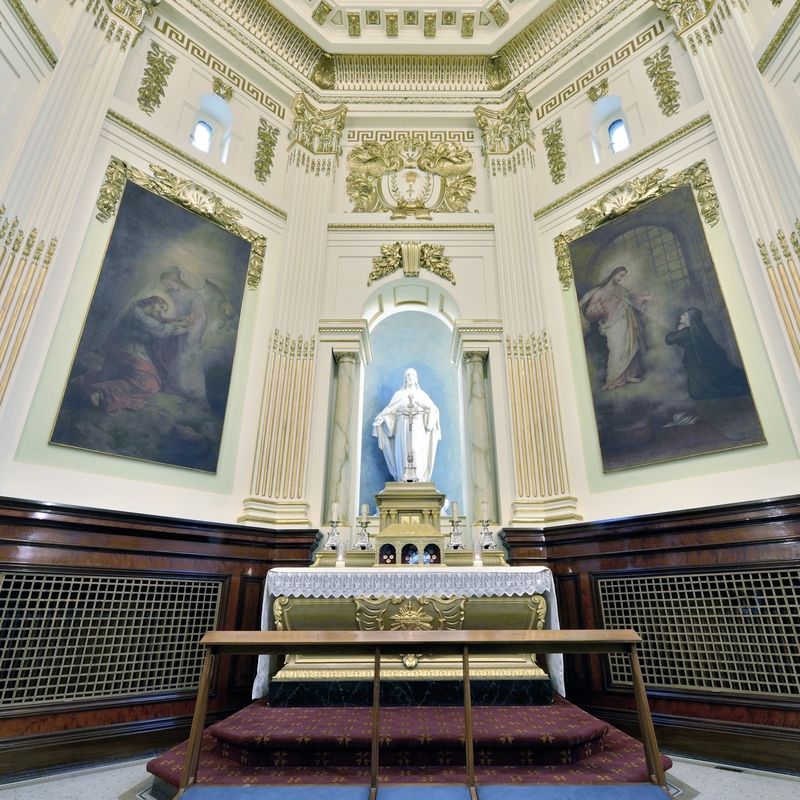 The Sacré-Cœur chapel was suggested and sketched in 1872 by Eugène-Étienne Taché, the architect of the Hôtel du Parlement de Québec. It is, however, architect François-Xavier Berlinguet who developed the plans and supervised the work, which took place in 1888. Its ornamentation was inspired by the chapel in the central nave of the basilica.

The Sacré-Cœur chapel is mostly known for its famous Holy door, located on its left side.

The paintings that surround the altar; The Agony of Our Lord is supported by the angel and the emergence of the Lord in Saint Margaret-Mary. These are oil paintings from sister Saint-Jean-Berchmans and sister Saint-Aubin, sisters of the Bon-Pasteur de Québec, which we mentioned earlier during the visit. 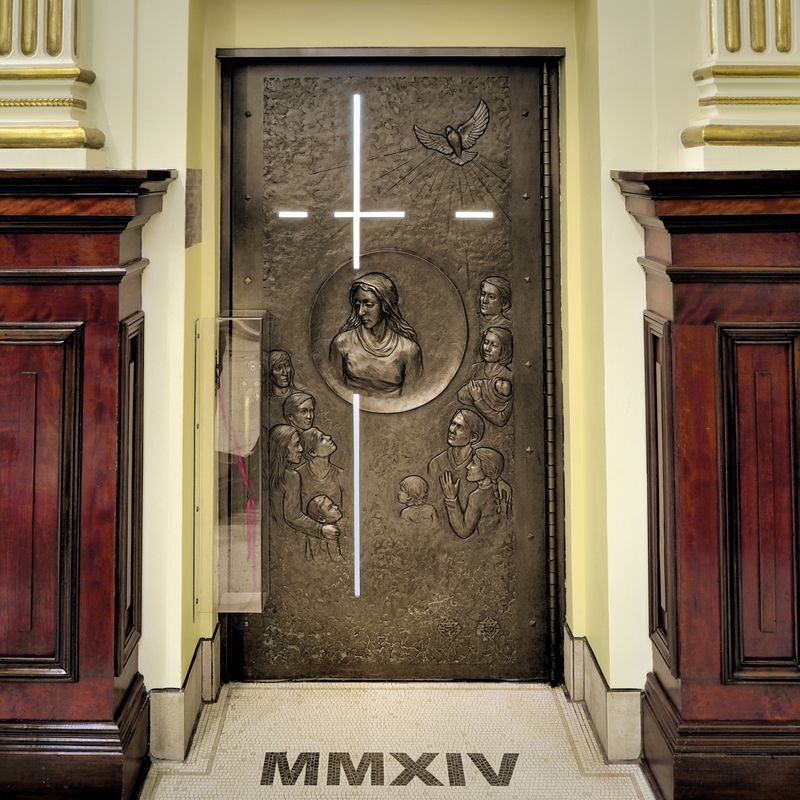 On the occasion of the 350th anniversary of the Notre-Dame de Québec parish, the Holy See granted an exceptional privilege to the first Catholic parish in North America located north of the Spanish colonies: the installation of a Holy door. It is Jules Lasalle, a Montreal sculptor, who was hired to produce it. This door, which weighs about 2000 pounds, was crafted at the Atelier du bronze, located in Inverness, in the center of Québec.

Its execution was made possible through the generous contribution of the Knights of Colombus (from Canada and United States), and of the Groupe Dallaire, chaired by Michel Dallaire.

About the Holy door

INAUGURATION
This highly significant work was inaugurated in the Sacré-Cœur chapel on December 8, 2013. It was then locked and sealed on December 28, 2014, closing day of the festivities for the 350th anniversary of the parish. In 2014, over 325,000 pilgrims walked through the Holy door.

JUBILÉ DE LA MISÉRICORDE (JUBILEE OF MERCY)
The Holy door was unsealed on December 8, 2015 by Cardinal Gérald Cyprien Lacroix, a few hours after the opening of the Holy door of Saint Peter’s Basilica in Rome, by the pope François, to mark the beginning of the Jubilee of Mercy. The opening ceremony of the Holy door took place on Saturday, December 12, 2015. Just over 200,000 people walked through it until it was sealed again on Sunday, November 13, 2016.

Unless Pope François decides otherwise, the door will remain closed until the next Jubilee planned for 2025.

Statue of the Sacred Heart 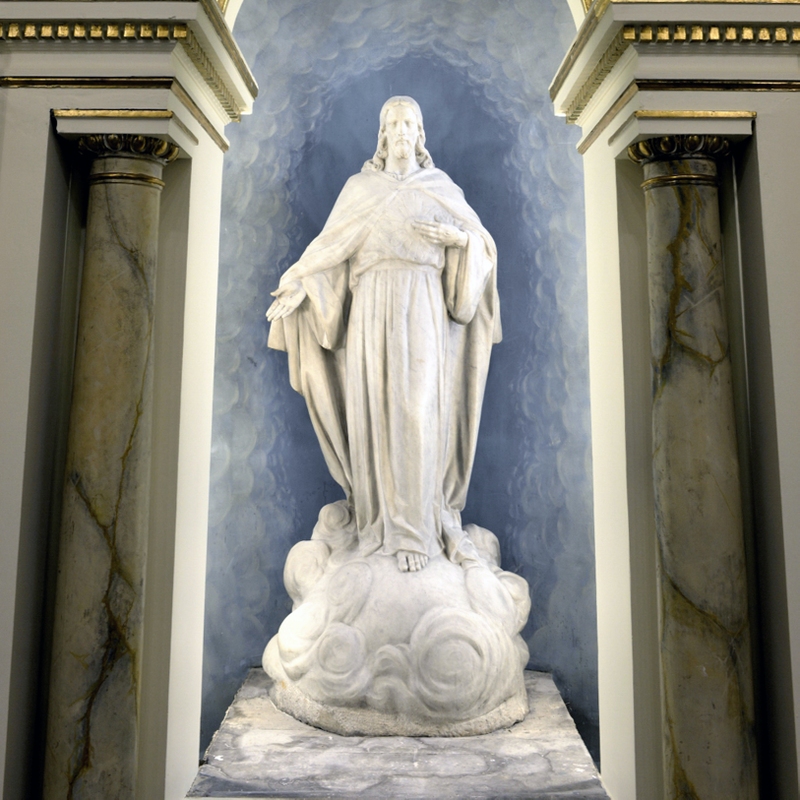 The marble Sacred Heart is the work of Parisian André Vermare. This sculpture in the round represents the risen Jesus showing his heart aflame with love for humanity. The work measures 200 cm high by 94 cm wide and 80 cm deep. The devotion to the Sacred Heart is important to the devotion of the Quebec people. 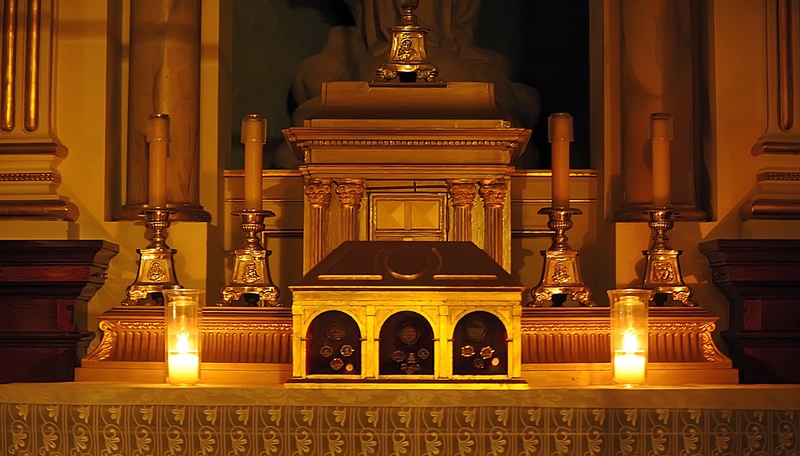 Also note, on the altar, the reliquary of all the saints and blessed of Canada.

The visit of John Paul II 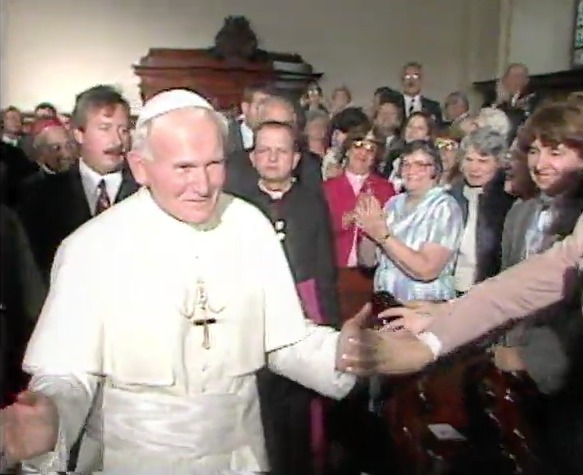 On September 9, 1984, Pope John Paul II inaugurated his pilgrimage to Canada by recollecting in the Sacré-Cœur chapel shortly after his arrival to the Quebec City airport.

Charismatic, the Holy Father pleased the crowds of pilgrims welcoming him in the course of his travels. This photo of the Supreme Pontiff was taken in the basilica during the event.

Video from the visit of Pope John Paul II