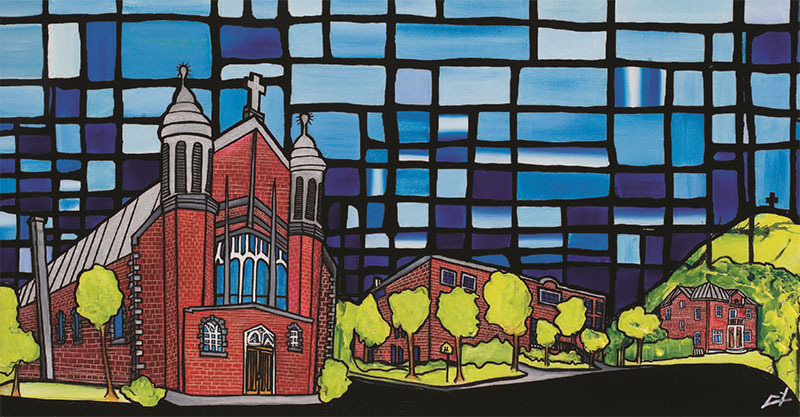 Growing up in Sainte-Adèle, Étienne Martin soon discovered the properties and possibilities that ink has to offer. Honest in front of the canvas as he is in life, Étienne creates for the sake of creating, without comparison or pretension. Authentic, exposed and without a mask, he reproduces himself through his work.

In 1913, MGR Bruchési blessed the expansion of the Mont-Rolland mill during a pastoral visit. He granted permission to build a chapel. Fathers Parfait Michaud and J.A. Bolduc became the first priests to serve under Father Armand Paiement of Sainte-Adèle.

In 1914, the trustees elected to oversee construction of the chapel were: Jean Rolland, mill plant manager and Sainte-Adèle municipal counsellor; Ovila Proteau, merchant and postal worker; Moïse Deschambault, innkeeper; Lambert Beauchamp and Aurèle Lanthier, mill bookkeepers. Construction of the chapel was slotted for a plot of land given by Jean Rolland, who had got it from his father.

The architectural plans were drawn by Wilfrid Fillion of Saint-Jérôme at the cost of $4,755. Sacerdotal ornaments came from a merchant in bankruptcy. The Rolland family supplied wood, tools and manpower to build the church. A family member donated the organ and a painting of the Sainte-Famille. Chairs were placed in the nave and the first mass was celebrated on Christmas Day. The consecration of the chapel was performed by Mgr Martin. A raffle organized by Father Paiement from Sainte-Adèle raised $2,000.
Get directions
QR code