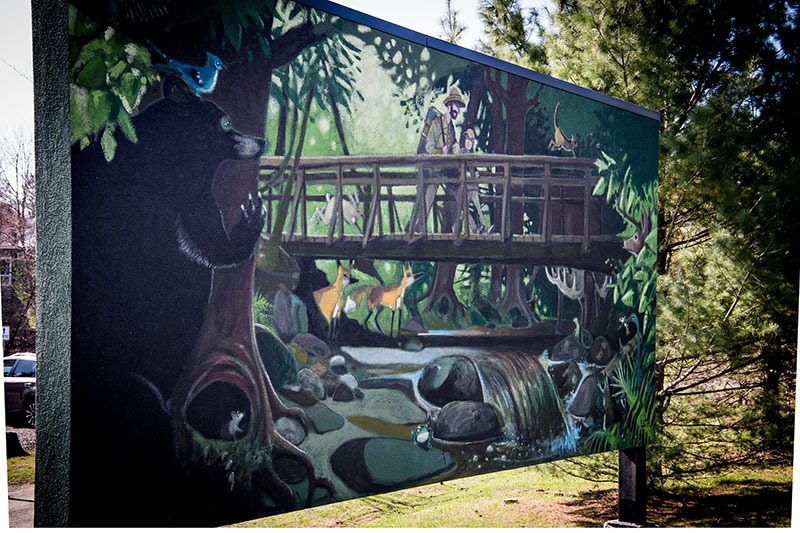 Cédric Loth was born in 1955 in Saint-Jérôme. A multidisciplinary artist, he works as a caricaturist and as a comic book illustrator.

He started out as a designer and artistic director at a major communications agency. Considering it is necessary to preserve his artistic creativity, he pursued multiple activities, including illustration, animation screenwriting, bronze sculpture and painting. As part of a cultural exchange with the city of Ming Wang, the Town of Sainte-Adèle chose Cédric Loth to produce the fourteenth and fifteenth mural in the circuit.

Located on the site of a former hydroelectric dam, Parc de la rivière Doncaster was created at the end of the 1990s in a joint project by Hydro-Québec and the Town of Sainte-Adèle. Open year-round, the aim of the park is to preserve the rustic character of the setting, to protect the river and to provide a public resort area.

In this little slice of paradise lies a network of over ten kilometres of trails of all levels, ideal for hiking in the summer and snowshoeing in the winter.  A wonderful advantage of the Laurentians can be found at 373 metres in altitude. What’s more, the park offers a wealth of resources for birdwatchers, botanists and anglers as well.

Doncaster Park is named after the village of Doncaster in Yorkshire, England. The source of the river is located on the Doncaster Indian Reserve, which belongs to the Kanesatake Mohawks.
Get directions
QR code