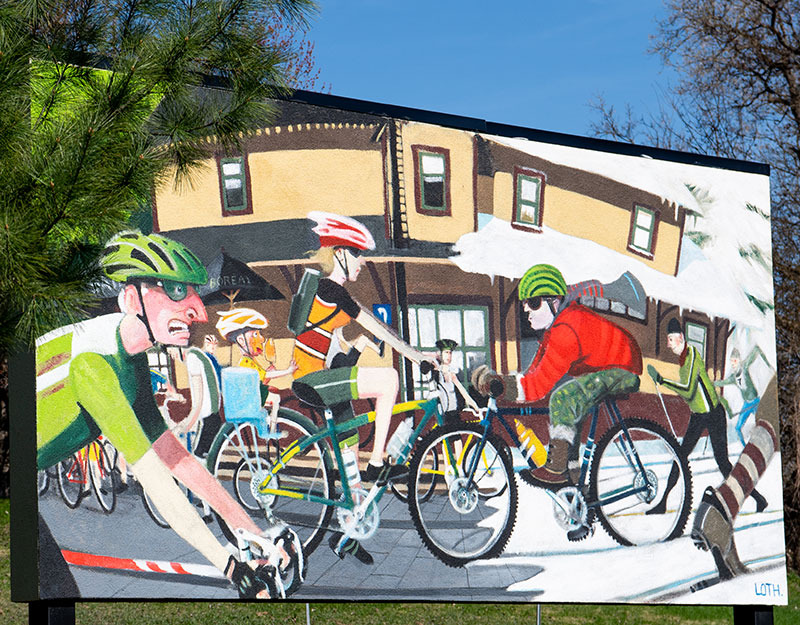 Cédric Loth, a Saint-Jérôme native, started working as a caricaturist for the French-language newspaper, Le Devoir, and then the Soleil.

In the 1980s, he decided to focus on comics and worked for the prestigious European comic book magazine, Métal Hurlant. He works alongside the world’s greatest comic book illustrators and his comic, Atlantic City, has been translated into seven languages.

The train arrived in Sainte-Adèle in 1802. The station, built in the «cottage orné» style with dormers,  was built in 1928.

The Canadian Pacific Railway discontinued service on this line in 1981.

In 1989, the Mont-Rolland municipal council with Claude Grégoire as mayor gets involved in the station renovation so as to make a heritage attraction. The railway was dismantled in 1990. The neighbouring regional municipalities came together to establish the Parc linéaire Le P’Tit Train du Nord linear park, inaugurated in 1996. Covering over 232 kilometres between the towns of Bois-des-Filion and Mont-Laurier, it is the longest linear park in Canada. The park crosses Sainte-Adèle for 13 kilometres along the Rivière-du-Nord, offering a four season playground for biking and cross-country skiing. Today, the train station serves as a rest stop for park users.
Get directions
QR code